Before I start, it’s best to lay my cards on the table. I’m writing this post to convince you that you may not don’t need Wordpress or Drupal to build your new website. The web has grown up and with it, new technologies have come a long that can give you a faster, more secure website at a lower cost. I’m going to tell you about one such technology today: static site generators.

Static in this case just refers to not having a database. Instead, they use a "flat file" structure just like the files on your computer. Static sites can have engaging animations, fun interactions and all the other features of current web technologies. For a good example, check out one of our recently built sites: Wildforth Creative. Their site is a static site built with NetlifyCMS.

Static site generator websites are faster, more secure and have a better development experience - meaning that they’re faster and easier for us to build, saving you money.

Let’s first talk about why they’re faster, without going into the weeds. Websites are usually built with a “dynamic site generator” a server that sends all the files of a website to your browser. That server runs the generator to create new HTML files every time a user requests a page. Because this is an inherently slow process, caching was introduced to save the HTML files on the server. A cached page is a static version of a web page. But getting caching right is difficult and inevitably a user will perform a “cache busting” interaction, causing the server to grab data from the database and re-generate the HTML files, then send those on to the user. Static site generators don’t do any of that. Instead, the developer or site editor makes a change, their computer re-generates the site, then sends that to the server. The server doesn’t have to do any site-generation, it only sends the site’s files to users. This results in a noticeably faster website for your users.

Static sites are more secure because they have less “surface area” that is vulnerable to attack. All of the common database attacks that often cause site outages simply aren’t possible with a static site. Enough said.

We can build sites with static site generators at a lower cost for a few reasons. One is that the the initial building of the site can all be done in code. Contrast that with a Wordpress or Drupal site where there is a lot of configuration that needs to be done in the admin interface backend.

Use Cases for Static Sites

Not every project will be suitable for static site generators. If a site is very large, has many editors with different levels of editing permissions, or has complex relationships between content, then a more traditional database driven content management system such as Drupal or Wordpress are more likely to be the best solution. Frankly, Drupal is still our most commonly used CMS here at Eclipse since most of our projects fit the description above (complex, many users with varying levels of permissions and lots of features).

Best of Both: Static Site CMS

Static site generators started gaining popularity a few years ago and in 2020, the world of web development is flooded with SSG options. At Eclipse, we prefer using Jekyll. But there are many different SSGs out there. But just know that all have three primary benefits: they're faster, more secure, and least costly since they take your preferred web development shop less time to build.

Until recently, static sites were not easily edited, requiring you to learn a bit of code or asking your developer to make content changes for you. No more! We’ve recently started building some of our clients’ sites as static sites with NetlifyCMS, built by Netlify. Using NetlifyCMS, we can build a a site that gives you the benefits of a static site but can be easily edited. The admin area where you edit pages is simple and easy to use. In the first screenshot below, you can see the editing interface for a basic page. 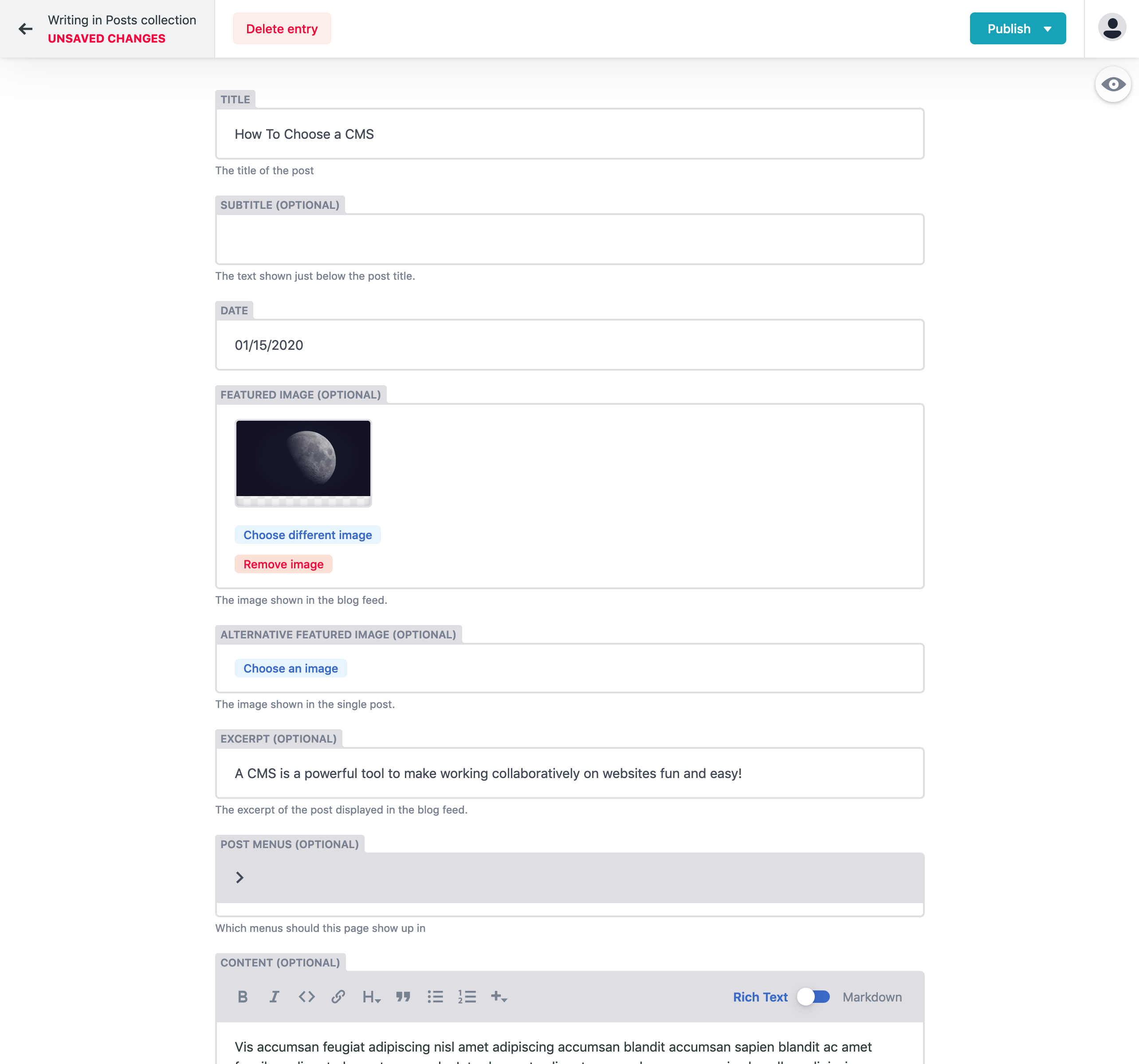 This screenshot shows what the actual page being edited will look like. 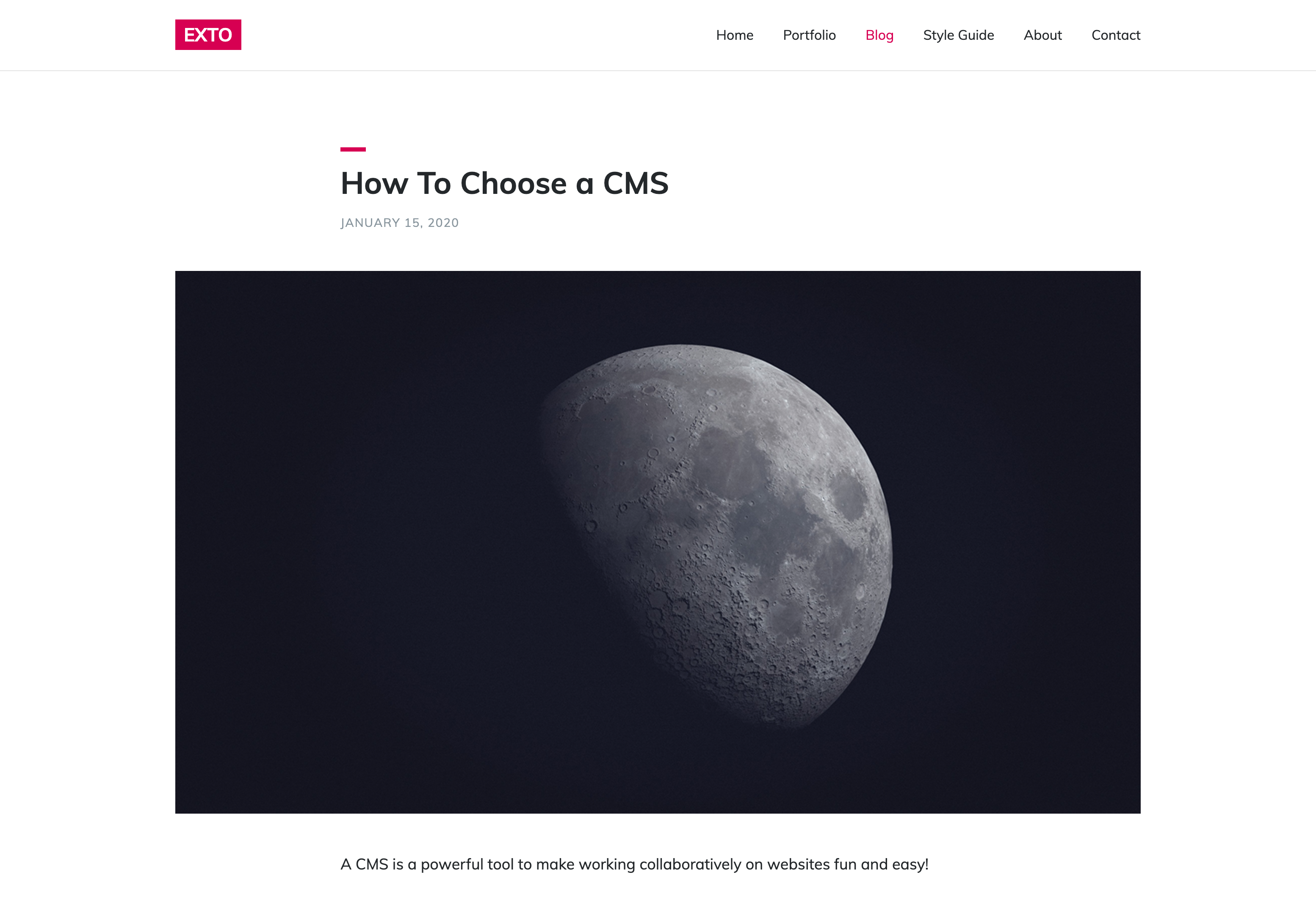 Kyle has more than five years of management and teaching experience. In addition to being the resident grammarian, he styles and builds features for new projects in addition to completing client requests for style and content updates.